The keys to the renovated Museum of the Occupation of Latvia have been solemnly handed over for setting up the museum's exposition. 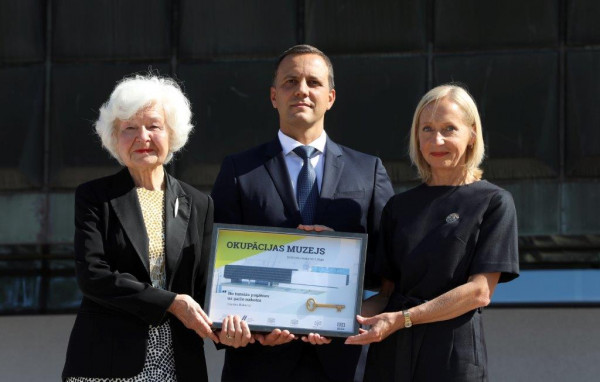 Today, on 13 August, the keys of the complex of the renovated Museum of the Occupation of Latvia at Strēlnieku laukums 1, Riga, were solemnly handed over for setting up the museum's exposition. The historical building has been expanded with a new, profusely-lit wing called the Building for the Future. As a result of the reconstruction, the museum has acquired almost twice as much premises - premises for the new exposition, modern office rooms, as well as specially equipped museum storage and archive premises, informs Renārs Griškevičs, Chairman of the Board of SRE.

Renovation of the house was completed by implementing the idea donated to Latvia by the well-known Latvian architect Gunārs Birkerts. “In the beginning there was a vision. A vision to add a profusely-lit wing light extension to the black building of the Latvian Red Riflemen Museum, closing it with a glass wall. Architect Gunārs Birkerts described it as a metaphor for Latvia's recent history: from the dark past to the bright present, and to the enlightened future. It was this month - in August 2001, when Riga celebrated its 800th anniversary. Exactly 20 years from the vision to the key. And now there is an actual house in front of our eyes, which back then we called our Building for the Future. The director of the museum now has the key - not only to this house, but also to the work to be done. The building for the future is built; it is no longer in the unknown future, it is now the Museum of the Occupation of Latvia,” points out the literature expert, long-term Chairman of the Board of the Museum of the Occupation of Latvia, Valters Nollendorfs.

The renovated building will be complemented by a large outdoor object next to it: the 10 m tall and 18 m wide ‘Vēstures taktīla’ memorial to the victims of the Soviet occupation, which is a symbol for the connection between the present and the tragic events of 1941 when the Soviet regime deported more than 15 thousand Latvian citizens. The memorial is equipped with special audio-visual equipment creating sound, vibration and lighting effects. They will fit into the urban environment of Riga and are available to the public from today. The sound solutions for the memorial were created by the artist Voldemārs Johansons, the surnames of the victims of repression are synthesised with the help of “Tilde” artificial intelligence technology. In the forecourt of the Building for the Future, on the side of the Daugava, six birches have been planted, which reflects the idea of a birch grove - an important symbol of the Latvian landscape.

There were various obstacles to the implementation of the idea of the architect Gunārs Birkerts in Strēlnieku laukums, which were overcome by joint efforts. The building of the Museum of the Occupation and the memorial were granted the status of an object of national interest and the functions of the Construction Board were transferred to the Ministry of Environmental Protection and Regional Development.

A total of up to 10 434 869 euros was invested in the reconstruction of the Museum of the Occupation of Latvia, the construction of the Soviet occupation victim memorial complex, and the renovation of Strēlnieku Square: The Ministry of Culture has attracted state budget funding of 9 405 196 euros, the Museum of the Occupation of Latvia has co-financed 160 000 euros, while co-financing from the European Union funds, the state budget and Riga City Council amounts to 869 673 euros. The construction was conducted by SIA ‘Skonto būve’ based on the design by architect firm SIA ‘5. iela’ . The creators of the artistic idea “Vēstures taktīla” for the memorial are Kristaps Ģelzis, Ilze Miķelsone and Voldemārs Johansons from SIA Taktila, whose sketch was found to be the best by an international panel of judges in 2007.

Work on the completion of the renovation of Strēlnieku Square will continue this year - the state and local government are cooperating in this project for a common goal. Part of the Latvian Riflemen Square belongs to the state, and the other part to the local government. Alongside the renovation of the Museum of Occupation complex SRE undertook an initiative to organise the reconstruction of the cover of the new complex next to the existing Riga Municipality territory; SRE and Riga City Council have agreed to renovate half of the square in late autumn of this year, with plans for the council to repair the remaining part of the square, near Riga Technical University, in the coming years.

Under the conditions of the pandemic, in accordance with the precautionary and safety requirements, work at 43 national construction sites with a total project budget of 156 million euros continues under the management of SRE. The company is one of 23 Latvian companies that have received the highest platinum award as part of the Sustainability Index of the Institute of Corporate Responsibility and Sustainability, confirming the good governance and sustainability of its operations. SRE was founded in 1996 and its sole (100%) shareholder is the Ministry of Finance of the Republic of Latvia.