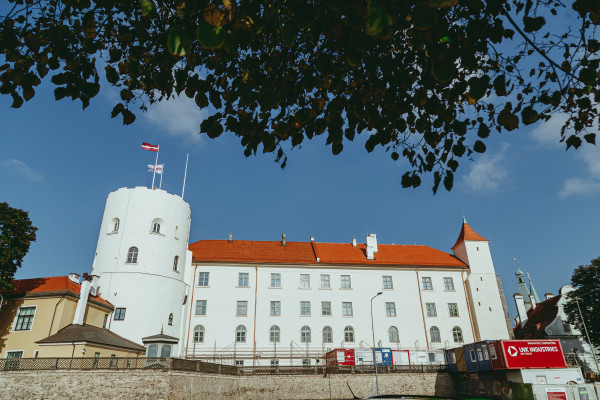 As part of the restoration and reconstruction project of the oldest convent (kastel) part of the Riga Castle implemented by SJSC "State Real Estate" the restoration works of the western facade have been completed. Until the end of October, the historical, 16th century southern facade, about which a decision was made in cooperation with the National Cultural Heritage Board (NKMP) to preserve it in its original appearance, will be visible to every passer-by, says Renārs Griškevičs, chairman of the Board of SRE.

Riga Castle is a unique historical building in Latvia and even in the Baltics, which has been rebuilt and supplemented many times over the centuries. In the course of the construction works, it was revealed that under the plaster of the southern facade of Riga Castle, instead of the rebuilt facade of the 19th century, there are culturally and historically more significant and aesthetically valuable historical walls from the 16th century. In cooperation with NKMP experts, a decision was made to preserve the authentic facade exposures on the western facade and to expose the southern facade with the historical wall, without plastering.

"The oldest or convent (kastel) part of Riga Castleis a treasury filled with cultural and historical discoveries, revealing various historical values to us, not only inside it, such as the 600-year-oldhypocaustoven or wall paintings in the chapel, but also on its outer walls. Before commencing the restoration works on the facade, it was not expected that under the plaster an authentic 16th century wall in a good condition remains, significantly increasing the cultural and historical value of the castle. Therefore, in cooperation with NKMP experts, a decision was made not to cover the historical evidence with plaster, but to leave it visible to every resident of Riga and city guest, thus exposing a part of the history of our castle in the urban environment," indicatesR. Griškevičs.

"Until the start of the works, the southern facade of Riga Castle was visible in the form that was created around the middle of 19th century, when the plastering work of the facade took place. Until then, since the 16th century, the facade had not been plastered, but there was no information about this wall, its volume and quality. Although initially the construction project anticipated preserving of the facade in a plastered form, in the process of removing the damaged parts of the plaster, a surprising scene was revealed with the 16th century wall emerging in a high quality, which included the window extensions done in the middle of 19th century, by building columns and window structures corresponding to its time. Uncovering and exposing of the original 16th century wall of the southern facade is the only opportunity to confirm and demonstrate by using an extensive but at the same time limited viewing angle the sternness, construction art, corporeity and authenticity of the late medieval fortifications of Riga Castle," says architect Pēteris Blūms.

The inside of the castle is already taking on its new shape. Communications have been built in the risers and floor of the castle, assembly works of metal structures for the elevator shaft have started, and the construction of plasterboard structures in separating walls and ceilings continues. The ceiling and walls have already been restored in the historic Moses Hall, and in cooperation with experts from Germany, a solution for removing the mezzanine floor covering of the historic Remters Hall has been successfully developed, thus revealing the original spaciousness of the room to every visitor of the museum. The removal of the covering will begin by the end of this year and the work will be completed in the spring of 2023. The walls above the vaults of Remters Hall have already been dismantled, creating more space on the 4th floor and in the attic. The necessary chimney dismantling works and durability tests of the existing structures have been performed, as well as the samples prepared for the new braces.

Under the supervision of SRE, JSC “LNK Industries” is carrying out the construction of the first and second rounds of the convent of Riga Castle by investing the state budget funding attracted by the Ministry of Culture. The total project budget is almost 22 million euro. The restoration of the convent of Riga Castle is carried out according to the construction project developed by GP “Rīgas Pils Kastelas projekts”. It is planned that the project will be completed in 2024, and the National History Museum of Latvia will be able to return to its historic home, as well as open part of the exposition to the public. In the next stage of the project, the remaining convent premises will be restored and rebuilt in order to accommodate the main exposition of Latvian history in the castle.

SRE successfully implements 44 projects of national importance, of which 24 are in the construction stage. The total implementation budget of the projects is more than 336 million euro. SRE provides professional real estate management and administration for approximately 352 real estate properties consisting of 1000 buildings with a total floor area of 0.95 million square metres, along with land beneath the buildings covering 607 hectares and more than 3460 land properties with an area of 907 hectares. SRE is one of 23 Latvian companies that has received the highest platinum award as part of the Sustainability Index of the Institute of Corporate Responsibility and Sustainability, confirming the good governance and sustainability of its operations. The company was founded in 1996 and is 100% owned by the Ministry of Finance.