SRE: Together with German experts, we are developing a Remters Hall solution 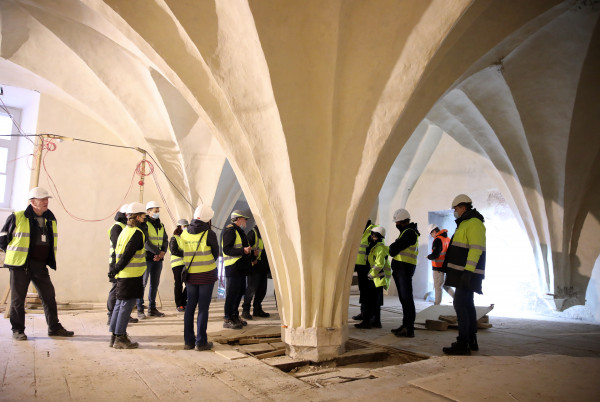 Last week, Riga Castle was visited by German architecture experts Dr Arch Wilhelm Poser and Professor Dr Arch Michael Ullrich to help find a solution for the gentlest removal of the mezzanine floor covering of Remters Hall, preserving as much unique historical evidence as possible and recommending the most successful ways to secure the columns in the hall, informs Renārs Griškevičs, chairman of the board of State Real Estate (SRE).

Uncovering the historical columns built into the partitions of Remters Hall, it was found that the columns were damaged and the dismantling of the mezzanine floor had to be stopped, the building's stability had to be recalculated and the building solutions redesigned. PS Riga Castle Convent project prepared changes to the project, envisaging the creation of significant additional supporting structures which surround the columns with metal rings that would reduce the load on the columns, but it did not receive approval from the National Heritage Board (NKMP) and the Council of Monuments. In order to find the best possible solution for the preservation of cultural and historical heritage, while ensuring a safe environment and providing the opportunity to preserve as much historical evidence as possible, the head of the Monuments Council Ojārs Spārītis and its expert Pēteris Blūms addressed experts from Germany who specialise in the supervision of restoration and reconstruction of historical buildings.

Wilhelm Poser and Michaels Ullrich visited the Convent part of Riga Castle for two days to get acquainted with the existing solutions, technical condition of the building, drawings and to provide a proposal for the removal of the mezzanine floor and to answer questions from architects, engineers and NKMP. In the final discussions, the experts recommended to solve the removal of the floor from a different point of view – relieving the historic vaults and columns from the masonry walls on the 3rd and 4th floors, thus finding an opportunity not to build new and unsuitable metal structures in the visual image of the premises. The ideas that emerged during the discussions have yet to be verified by building calculations, but the conceptual solutions found give hope that Remters Hall in the castle can retain its original appearance. A written description of the proposals will be sent shortly by colleagues from Germany.

Riga Castle is a unique historical building in Latvia and even in the Baltics, which has been rebuilt and supplemented many times over the centuries. Many historical details that have been hidden so far have been uncovered this year. Under the supervision of SRE, JSC LNK Industries, with which a contract has been concluded for 13.2 million euro (excluding VAT), is carrying out the construction of the first and second stages of the convent of Riga Castle funded by the Ministry of Culture, and construction works commenced in autumn 2020. The restoration of the convent of Riga Castle is carried out according to the construction project developed by GP “Rīgas Pils Kastelas projekts”. It is planned that the project will be completed in 2024, and the National History Museum of Latvia will be able to return to its historic home, as well as open part of the exposition to the public. In the next stage of the project, the remaining convent premises will be restored and rebuilt in order to accommodate the main exposition of Latvian history in the castle. While the castle is under construction, the public has the opportunity to take a virtual 3D tour of the most important part of the restored castle by video.