SRE: The development of the 1st stage of the Tobacco Factory Quarter will be performed by PS “BI_ZENG” 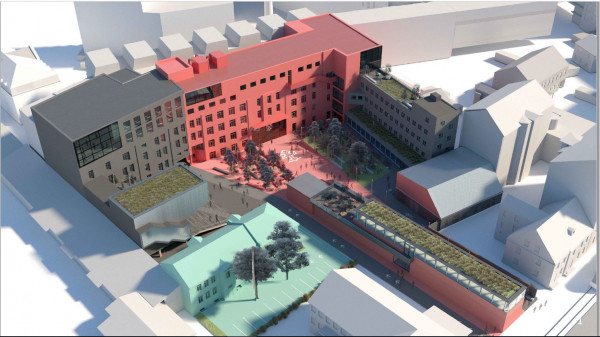 The Procurement Commission of SJSC “State Real Estate” (SRE) has evaluated the bids submitted in the repeated development procurement of the 1st stage of the Tobacco Factory Quarter, 58a Miera iela, Riga, and has recognized the bid of the general partnership (PS) BI_ZENG as the most economically advantageous for 3.85 million euros (excluding VAT). If there are no appeals, SRE will enter into an agreement with the entrepreneur and construction works will commence in the coming months,” informs Jānis Ivanovskis-Pigits, Director of Development at SRE.

"The sharp rise in prices experienced in 2021 affected not only the builders, who had to withdraw their applications in various procurements, but also the customers. The capital company has always made every effort to ensure that projects are implemented timely and in frame of the budget. The estimated agreement price of the repeated procurement is higher than the initial one, but it is still in line with the total budget of the project,” says J. Ivanovskis-Pigits.

The territory where the renewable buildings are located can be assessed as one of the most degraded neighbourhoods of Riga, but at the same time the historical industrial environment has been preserved there. The buildings in the Tobacco Factory Quarter are national significance monuments located in the “Riga Historical Centre” protection zone.

The territory of the Quarter has a long and rich history, which has influenced the development of the Quarter. In 1912, the Tobacco Factory “A.S. Maikapars” founded by Samuels Maikapars was located in the territory of the quarter. In 1940, the factory was nationalized and transformed into the "Riga Tobacco Factory", while in 1992 the Latvian-Danish joint venture “Tobacco Factory “House of Prince Riga”” was established on its basis. In 2009, the factory was closed and by 2017 part of the oldest building was restored, becoming the temporary residence of the New Riga Theatre.

At the end of 2018, the vision developed by the architectural firm NRJA envisages the development of the territory of the Miera iela Tobacco Factory Quarter in several stages. At the end of the project, the Creative Industries Incubator and the National Film School of the Latvian Academy of Culture, as well as a separate filming pavilion will be located in the quarter. In the future, the quarter will provide a modern learning environment for students and academic staff of the Latvian Academy of Culture and cooperation with companies in the creative industries. In the first stage of the quarter's development, the buildings where the New Riga Theatre is currently located will not be affected.

At the same time as the creation of a prototyping complex with the support of the ERDF, SRE is implementing the creation of two more creative quarters. On the adjacent Miera iela, the 1st stage of the future Tobacco Factory Quarter will be developed for the needs of the Latvian Academy of Culture and Creative Industries Business Incubator, while in the area of Šķirotava at Meirānu iela 2 there will be cultural premises and a performing arts decoration workshop complex of the SLLC ‘Latvian National Opera and Ballet’. It is planned to already hand over the construction in three quarters in the surroundings of Riga to the public for creative development purposes in the autumn of 2023.

SRE currently continues works on 54 different construction sites of national importance, with a total project budget of 223 million euros. SRE provides professional real estate management and administration for approximately 400 real estate properties with 1100 buildings and 1.02 million square metres of space, and more than 3600 land properties of 9.6 million square metres. The company was founded in 1996 and is 100% owned by the Ministry of Finance.