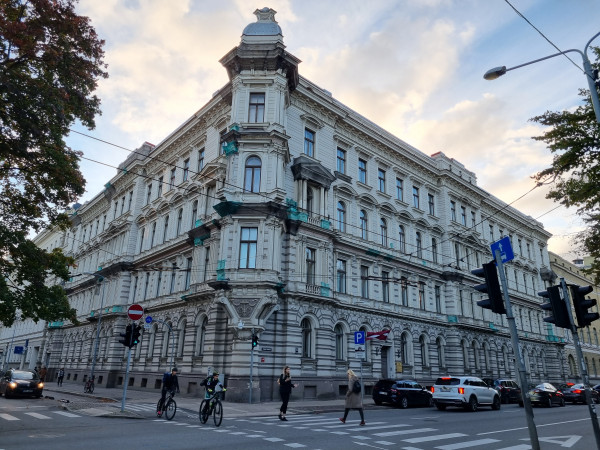 “Under the supervision of SJSC State Real Estate, the development of a project for the reconstruction and adaptation of the historic building at Kalpaka bulvāris 6 in Riga for the needs of the General Prosecutor's Office in the 3D construction information modelling (BIM) environment has been started. The project is implemented in accordance with the basic principles of sustainability developed in the company – in addition to the existing regulatory requirements, SRE has set sustainability requirements for designers, the implementation of which will reduce the full life cycle costs and negative impact on the environment,” informs Renārs Griškevičs.

According to the European Green Deal, the construction and operation of buildings account for 40% of total energy consumption. In developing the guidelines, the SRE has taken into account international practice. According to the sustainability guidelines developed by the SRE, service providers will have to comply with requirements such as the choice of reusable structures and materials, ergonomic requirements for workplace furniture and materials, energy efficiency increasing measures, obtaining energy from renewable energy sources, indoor climate regulation, green transport, water reduction and other things. The project requires designers to perform life cycle costing (LCC) calculation and life cycle assessment (LCA) of buildings, thus providing an understanding of the long-term benefits and environmental impact of the solutions included in the project.

“The plan for the implementation of sustainability principles in SRE development projects has been developed with the aim of ensuring more efficient use of resources, reducing the negative impact on the environment, as well as promoting innovation. 6 Kalpaka Street, Riga, is the first public building, the renovation of which will take into account the new requirements. SRE started the sustainability course two years ago with a construction information modelling (BIM) pilot project at Aspazijas bulvāris 7, Riga, which is also the building of the General Prosecutor's Office. We are currently working on 17 BIM projects. The development of the project in the 3D BIM environment allows overcoming the challenges of rebuilding historic buildings faster and more efficiently, saving time and financial resources, while BIM models are used to read the necessary information about the building's environmental impact, energy efficiency, lighting, air quality, acoustics, etc., and calculations,” R. Griškevičs points out.

The General Prosecutor’s building requires the renovation of the eclectic façade, the improvement of the overall technical and visual condition, while adapting the premises to modern needs, as well as significant restoration work, preserving the architecturally and artistically valuable cultural heritage in accordance with the recommendations of the National Heritage Board.

A contract has been concluded with PS “JaunRīga un LDU” for the development of the General Prosecutor's Office building project in the 3D BIM environment, performance of author supervision and updating of BIM during construction works, contract price – 759,000 euro without VAT. The contractor must perform the planning work within 16 months from the moment of concluding the contract, in accordance with the Cabinet Regulation No. 686 of 28.09.2021, reconstruction works of the building are planned to be completed by summer 2025. The funds required for the reconstruction work will be allocated from the state budget. To cover construction project development expenses in accordance with the Cabinet Regulation No. 783 of 03.11.2021, SRE will divert the revenue from the company's 2020 profit.

The building of the Prosecutor's Office of the Republic of Latvia on Kalpaka bulvāris 6, Riga, was built according to the 1881 design of the architect Jānis Frīdrihs Baumanis, and was planned as a tenement house with luxurious apartments. The project of the building was commissioned by Ludwig Wilhelm Kerkovius, who was an important figure in his time – a merchant, elder of the Grand Guild, actively involved in the political life of Riga. In 1873 he was elected as a member of Riga City Council, in 1874 – mayor, from 1890 until 1901 he was the head of the city of Riga.

SRE currently continues works on 54 different construction sites of national importance, with a total project budget of 223 million euro. The company provides professional real estate management and administration for approximately 400 real estate properties with 1100 buildings of 1.02 million square metres and more than 3600 land properties of 9.6 million square metres. The company was founded in 1996 and is 100% owned by the Ministry of Finance.