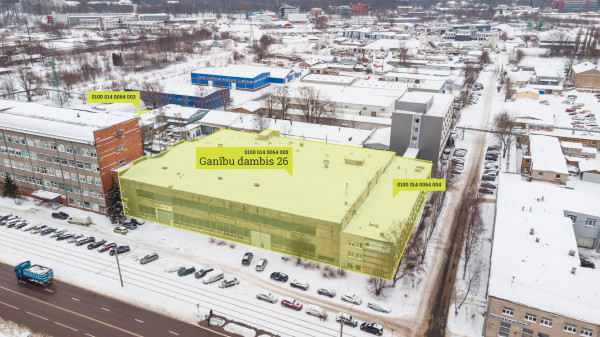 “The bidding for real estate near the Riga commercial port, Ganību dambis 26, Riga, has ended. The property includes two engineering buildings with a total area of 1683 m2 and 5,132.5 m2, as well as a pumping station with a total area of 38.3 m². Together with the buildings, two land units with an area of 6,072 m2 and an area of 54 m2 were sold. In the open e-auction with a starting price of 894 thousand euro and an auction step of 5 thousand euro between three bidders, for 909 thousand euro, an industrial building has been auctioned to a legal entity, giving it the opportunity to gain a new, promising future. The agreement on the purchase of real estate will be concluded within the next month", informs the board member Andris Vārna.

The building complex at Ganību dambis 26, Riga, was taken over from the Ministry of Education and Science by SRE on behalf of the Ministry of Finance, in 2009. During the takeover of the property, it was leased by SIA “Radiācijas un kodoldrošības tehnoloģiju centrs ‘RNIIRP’”. At present, the building is leased as storage premises from SRE by 32 tenants and one lessee has an advertising space lease agreement with the state joint stock company. The new owner will take over the property with all lease agreements and decide on its further development.

In accordance with the strategy of SRE, the company, in cooperation with the departments and their subordinate institutions, decides on the necessity of property for the performance of public administration functions. If the property is recognised as suitable for public administration, assessing all risks and benefits, it is adjusted to the needs of a particular institution; if it is not recognised as necessary, it is alienated in accordance with the procedure stipulated by the Cabinet of Ministers – public auction, diverting the obtained funds to the restoration of state-required properties or transfer to other possessors (such as municipalities), enabling their new development. If the buildings are being renovated and the owner is responsible, it does not matter whether it is an individual, the state or a municipality.

"The real estate market is cautious at the moment, but it has not stopped. The sale of SRE real estate is proceeding according to plan. We are not currently feeling the full impact of the changes in the international political situation on the properties we are offering for sale. We feel the consequences for the developing and perspective sites, the future potential of which is affected by the rising prices of construction materials and the limited availability of materials. Potential and existing tenants of the premises have started to evaluate the energy efficiency and maintenance aspects of the buildings much more carefully,” reveals Vārna.

The auctions of SRE can be openly, publicly and conveniently accessed on the electronic auction website, https://izsoles.ta.gov.lv, in the manner prescribed in the Law on the Sale and Transfer of Public Property. Open e-auctions, which can be applied for by any interested party, guarantee the transparency of the process and are the best way to find out the real price of transactions, which is determined by market demand. Anyone interested can apply for auctions.

SRE currently continues works on 46 different construction sites of national importance, with a total project budget of 230 million euro. SRE provides professional real estate management and administration for approximately 365 real estate properties with 1100 buildings and 0.95 million square metres of space, and more than 3500 land properties of 9.6 million square metres. The company was founded in 1996 and is 100% owned by the Ministry of Finance.