SRE continues to improve the work environment of the Prosecutor's Office: the reconstruction project of the historic house at 6 Kalpaka Boulevard has been started 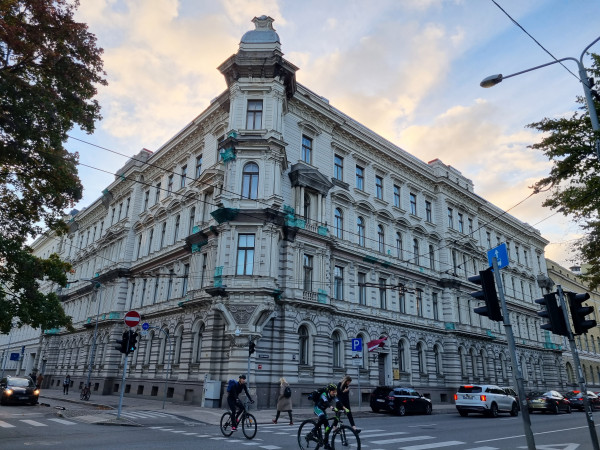 Continuing the centralisation of the building of the Prosecutor's Office of the Republic of Latvia (LR) and the improvement of the work environment, SJSC State Real Estate starts project development for the reconstruction and accommodation of the historic building at 6 Kalpaka Boulevard in Riga for the needs of the Prosecutor General's Office. This is the first project that will be implemented in accordance with the basic principles of sustainability of SRE, which will reduce the life cycle costs of the building and the negative impact on the environment, informs Renārs Griškevičs, Chairman of the Board of SRE.

The building requires the renovation of the eclectic façade, the improvement of the overall technical and visual condition, while adapting the premises to modern needs, as well as significant restoration work, preserving the architecturally and artistically valuable cultural heritage in accordance with the recommendations of the National Heritage Board. In addition to the existing regulatory requirements, SRE will set requirements for designers such as the choice of reusable structures and construction materials, ergonomic requirements for workplace furniture and materials, calculation of the impact of the building’s life cycle on the environment, more sustainable solutions for indoor air quality, climate, lighting, acoustics, water consumption reduction measures, power generation from renewable energy sources, energy efficiency improvement measures, etc.

“We are working to make the SRE property portfolio more energy efficient and more responsible in terms of resource consumption; in the development projects we develop and implement building sustainability guidelines, as well as we implement the certification of the building according to internationally recognised systems. It is planned to complete the development of the construction plan of the General Prosecutor's Office building at 6 Kalpaka Boulevard by 2023, by performing the reconstruction project of the building in several stages in the 3D Construction Information Modelling (BIM) environment for the more efficient course of works, which will allow us to overcome the reconstruction challenges of the historical building with all the parties involved in the construction faster and more efficiently, saving time and financial resources,” says Renārs Griškevičs.

“The daily work of a prosecutor is not easy, it requires a lot of concentration, the prosecutor must be able to analyse information, observe it in detail and make a decision. Also, in the daily work of a prosecutor, most of the time one faces negative emotions, often working in psychologically difficult conditions. In order to successfully and fully perform one's work duties, a work environment in which a person spends a significant part of his or her life is extremely important. They seem simple and self-evident things, but they create an opportunity to work more efficiently and make it easier to perform work tasks. The building on Aspazijas Boulevard has definitely made the daily work of prosecutors and administrative staff working in this building easier. It is a well-maintained, modern, bright building, and it is a pleasure to be and work here,” says Juris Stukāns, Prosecutor General.

An insight into the history of the 6 Kalpaka building

The building of the Prosecutor's Office of the Republic of Latvia on 6 Kalpaka Boulevard, Riga, was built according to the 1881 design of the architect Jānis Frīdrihs Baumanis from Riga, and the building was planned as the tenement house with luxurious apartments. The project of the building was commissioned by Ludwig Wilhelm Kerkovius, who was an important figure in his time - a merchant, elder of the Grand Guild, actively involved in the political life of Riga - in 1873 he was elected as a member of Riga City Council, in 1874 - mayor, from 1890 until 1901 he was the head of the city of Riga.

The house is a part of the UNESCO World Cultural and Natural Heritage Site “Riga Historical Centre” and the national urban planning monument “Riga City Historical Centre”. In 2016, SRE performed repairs in certain areas of the building, including the renovation of the main staircase and the construction of the basement. During the works, cultural and historical values were preserved - masonry walls were displayed and exhibited in the basement, but in the stairwell the wall paintings “Forest” and “Dredging” created by Jēkabs Štrauss during the 1930s were restored, as well as all stairwell doors have been renovated.

Under the conditions of the pandemic, in accordance with the precautionary and safety requirements, work at 43 national construction sites with a total project budget of 156 million euros continues under the management of SRE. The company is one of 23 Latvian companies that have received the highest platinum award as part of the Sustainability Index of the Institute of Corporate Responsibility and Sustainability, confirming the good governance and sustainability of its operations. SRE was founded in 1996 and its sole (100%) shareholder is the Ministry of Finance of the Republic of Latvia.