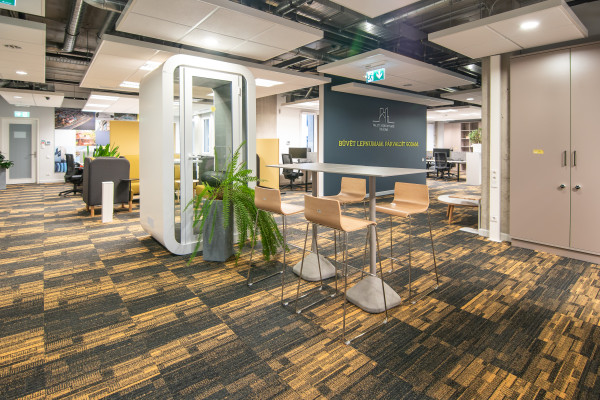 “During the first co-working pilot project of state institutions, SJSC “State Real Estate” (SRE), from 2 May to 29 July, provided opportunity for every representative of public institutions and state capital companies to gain new experience and try a smarter way of working in the SRE activity-based office. 399 employees from more than 30 different institutions used this opportunity,” informs Board Member Andris Vārna.

During the co-working pilot project of the state administration, the SRE activity-based office at 1 Talejas Street provided support to public institutions, including state capital companies which have started the process of changing the working environment or are still planning to do so. The purpose of the co-working pilot project is to give public sector employees the opportunity to get to know the advantages of a modern work environment in practice, to identify the demand for co-working offices, as well as to practically identify the range of information technologies and the most important aspects in order to promote the introduction of offices that meet modern requirements in the state administration.

The co-working opportunities offered by SRE have been most actively used by those state institutions and capital companies that have already made the decision to switch to an activity-based work environment in the future. Of the nearly 400 guests who were ready to try out a job in the activity-based office, 60% were leading employees of state institutions. The remaining 40% represented state capital companies, state joint stock companies or derived public entities. Participants of the pilot project are representatives of the Ministry of Economy, Agriculture, Health, Transport, Education and Science, as well as employees from the State Revenue Service, Rural Support Service, State Forest Service, National Archives of Latvia, State Audit Office, State Treasury and other institutions. The most actively involved in the project with 48–56 employees from the company were Riga Stradiņš University, Eastern Hospital and the Ministry of Justice, which worked in the office of the SRE in various teams for several working days.

“In the first SRE pilot project, we opened the doors of our office to every representative of the public sector in order to give them the opportunity to be inspired for positive changes and to allow them to try out the introduced smart work environment solutions in practice, as well as to encourage those employees who are still unsure of the changes in the work environment. In SRE, we have observed the benefits – information circulation and cooperation between structural units have improved in open planning, and there is quick and successful integration into the team. In the employee engagement study conducted last year, we found that the engagement rate reached 75 index points and is well above the public sector average. The results indicate that 80% of employees would re-apply for a job at SRE, 73% would recommend it to friends and acquaintances, 60% are satisfied and loyal to the company. The way we are working is changing in the world, and the time of the pandemic has only contributed to this – workplaces in the future will become more flexible and adapt to the needs of institutions and their employees, while offices will become more compact and closer to both employees and society in general. We will definitely continue this initiative and support for institutions in the creation of modern offices,” says Vārna.

Representatives of the public sector have mentioned different work areas for convenient performance of individual and team work duties and faster circulation of information as the main benefits of a smart work environment. As the second most important benefit, participants mentioned IT technologies that provide secure and flexible access to systems for team members working in a hybrid model. “In an activity-based office, it is possible to perform various work duties in one place more efficiently. The arrangement of the premises and technologies make it easy to conduct seminars and organise work groups, to connect to on-site and remote meetings, as well as to carry out individual work duties in the quiet work area,” comments Inita Pauloviča, advisor to the director of the State Chancellery of the Republic of Latvia on public administration policy, on the working day spent in the office of SRE.

The pilot project initiated by SRE continues to develop the concept of a smart work environment in the public sector, which was started last year in cooperation with the State Chancellery Innovation Laboratory with the “Future Office” report and the SRE developed “Guidelines on Creating the Office in the Public Sector”. Accessible to anyone planning a change in office design, the guidelines serve as a step-by-step guide to implementing a smart work environment. In the development of the guidelines, both SRE and international experience were taken into account, which summarises the factors of a smart work environment and promotes a smarter way of working. The expertise and experience of SRE is also taken into account in the State Modernisation Plan, which is currently being developed by the State Chancellery, in the future envisaging the creation of co-working spaces and activity-based offices in Riga and regions in order to promote the efficiency of state administration, including more and more efficient use of premises, environmentally friendly consumption of resources and financial savings in the state budget.

After the 2019 office change from three buildings to one, SRE can work more successfully and more efficiently in an activity-based office: the total office area was reduced by 45%, the number of workplaces – by 30%, saving 900 thousand euro on maintaining facilities over 5 years. Already now, according to the data of the SRE energy report, a total reduction of heat energy and electricity self-consumption by 65% has been recorded in 2020, compared to 2019.

SRE provides professional real estate management and administration for approximately 365 real estate properties consisting of 1100 buildings with a total floor area of 0.95 million square metres, along with land beneath the buildings covering 602 hectares and more than 3536 land properties with an area of 903 hectares. SRE is one of 23 Latvian companies that has received the highest platinum award as part of the Sustainability Index of the Institute of Corporate Responsibility and Sustainability, confirming the good governance and sustainability of its operations. The company was founded in 1996 and is 100% owned by the Ministry of Finance.