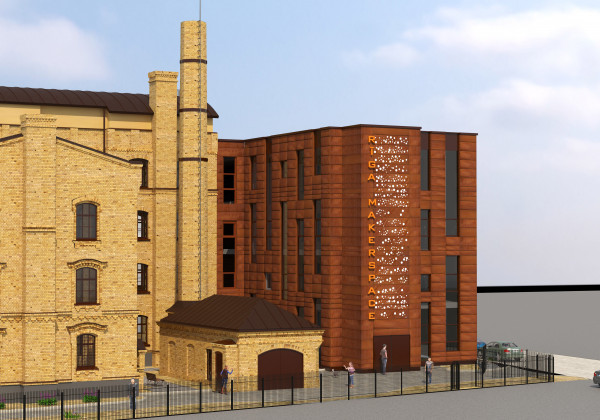 SJSC “State Real Estate” (SRE) announces a new procurement for the establishment of a prototyping workshop “Riga Makerspace”, as the tenderers - SIA “Selva Būve”, SIA “Reaton”, association of persons “P and P” and AS “UPB” have abandoned the idea due to the unexpectedly sharp rise in construction material prices and labour costs.

In the procurement announced this year for the establishment of a prototyping workshop “Riga Makerspace”, offers were received from 11 builders. SIA “Selva būve” was recognised as the winner of the procurement with a contract price of 6.37 million euros without VAT, but the construction contractor waived the right to enter into an agreement for the implementation of the plan, basing its decision on changes in the market situation. Offers have also been withdrawn by other tenderers who have provided the most economically advantageous offers - SIA “Reaton”, association of persons “P and P” and AS “UPB”. The reasons for the withdrawal of tenders are the non-compliance of costs with the actual market situation, as a result of which it is not possible to implement the works provided for in the open tender regulations at the prices previously offered by the builders.

Based on the above, and on the Cabinet Regulation adopted on 28 February 2017, No. 107 “Tendering Procedures for Procurement Procedures and Design Contests” the Procurement Commission decided to terminate the previously announced procurement and announce a new one. In the new procurement, the term for the completion of construction works is 18 calendar months from the date of concluding the procurement agreement.

The former Riga Light Industry Technical School building at 13 A. Briāna Street, Riga, will be adapted to the needs of a total of six Riga Secondary School of Design and Art and Latvian Academy of Arts educational programmes, creating appropriate new product sample production or prototyping workshops, which will ensure a high-quality and competitive learning process for pupils and students. In addition, modern rooms for seminars and other events will be set up.

This week, a new procurement has also been announced for the construction works of the 1st stage of the Tobacco Factory Quarter. Construction contracts have been concluded in three of the other four procurements announced by the SRE in the spring (increase of energy efficiency of the Puppet Theatre, establishment of the VSIA “Latvian National Opera and Ballet” decoration workshops and rehearsal hall complex and improvement works of Daile Theatre Forecourt). SRE currently actively works on 54 different construction sites of national importance with a total project budget of 193 million euros.

Last year, under the conditions of the pandemic, 17 national development projects with a total budget of 29.5 million euros were completed under the leadership of SRE. SRE provides professional real estate management and administration for approximately 400 real estate properties with 1100 buildings of 1.02 million square metres and more than 3600 land properties with an area of 9.6 million square metres. The company is one of 23 Latvian companies that have received the highest platinum award as part of the Sustainability Index of the Institute of Corporate Responsibility and Sustainability, confirming the good governance and sustainability of its operations. SRE was founded in 1996 and its sole (100%) shareholder is the Ministry of Finance of the Republic of Latvia.