In the reconstruction project of Riga Castle, a basement is being completed, and historical spaciousness revealed in other floors 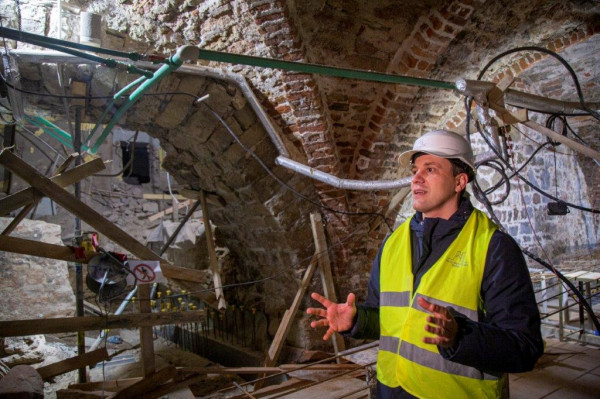 Under the supervision of SJSC State Real Estate (SRE), the reconstruction work of the basement of Riga Castle is coming to a completion, where a passage to the hypocaust oven discovered in the spring is being built, as well as several premises of the Castle have regained their original spaciousness and numerous archaeological objects have been discovered, informs Renārs Griškevičs, Chairman of the Board of SRE.

In the construction of the oldest convent (kastel) part of Riga Castle, the basement reconstruction project is nearing completion. Engineering communications have already been established in the basement, waterproofing works have been carried out and reconstruction works will be completed in the near future. At the junction of the southern and western buildings, an arch has been uncovered to gain access to the observation deck to the hypocaust oven, discovered in the spring.

On the ground floor - in the Moses Hall, the walls and ceiling arches have been almost completely stripped of paint, the historic floor tiles have been dismantled for restoration and the floor level has been lowered. In the next six months, engineering networks will be created, an additional entrance door to the driveway will be established, the floor base for the installation of the restored historic tiles will be prepared, as well as the wall and ceiling arches will be finished. On the second floor of the castle - in the Chapel, the historical research and restoration of the wall and ceiling arches has been completed, and the historical mezzanine covering has been removed. In the continuation of the works, the glazing of the walls and arches will be performed, the construction works of the engineering networks will be completed, as well as the floor and windows will be installed.

It is planned to place engineering communications in the attic and use part of the premises as a classroom and later - a place for the numismatics exposition of the Latvian National Museum of History. Part of the engineering networks have already been built there, as well as the roof load-bearing structures and the roof covering have been restored to almost the entire scope of the project. Pile works have been carried out in the gallery of the southern building. Over the next six months, it is planned to announce the procurement of the Daugavas gate reconstruction project, as well as to complete the dismantling of the courtyard tower.

“In cooperation with the architects, experts of the National Cultural Heritage Board and the builder LNK Industries, we continue to carefully restore the oldest part of the castle - the convent (kastel). Very careful and attentive restoration work is needed, as the building hides many unknown historical details. At the moment, for example, we are addressing foreign experts with experience in the restoration of historic buildings in order to find the best project solution for the most respectful removal of the mezzanine coverings of Remtera Hall. We wish to preserve the unique historical details and restore the historical spaciousness of the hall,” Griškevičs points out.

During 2021, the construction works performed in the oldest part of the Riga Castle convent (kastel) - provided various archaeological discoveries at every step, for example, in the basement of the convent a hypocaust oven was discovered, which dates back to the end of the 13th/14th century - it is the oldest, almost completely preserved hypocaust oven of this volume discovered in Latvia up to now. Discoveries have also been made earlier. The most important historical evidence found during archaeological works is the fragment of the defensive wall dating back to 1230 - 1330 discovered in the northern part of the Kastel, works in the depth of 1.5 m were performed in the western part - discovering remains of the city constructions of 1330 going under the courtyard wall of the Kastel, and foundation of the 2.5 mx 2.5 m chimney hearth has been uncovered.

“We are performing restoration works in the castle attracting the best renovators in Latvia. During the restoration process we have discovered several surprises. It is a great pleasure to work in the centre of the capital, in the historic castle building, and to observe how we restore its historical appearance every day,” says Valdis Čerpakovskis, Project Manager of JSC LNK Industries.

Riga Castle is a unique historical building in Latvia and even in the Baltics, which has been rebuilt and supplemented many times over the centuries. Many historical details that have been hidden so far have been uncovered this year. Under the supervision of SRE, JSC LNK Industries, with which a contract has been concluded for 13.2 million euros (excluding VAT), is carrying out the construction of the first and second stages of the convent of Riga Castle funded by the Ministry of Culture, and construction works commenced in autumn 2020. The restoration of the convent of Riga Castle is carried out according to the construction project developed by GP “Rīgas Pils Kastelas projekts”. It is planned that the project will be completed in 2024, and the National History Museum of Latvia will be able to return to its historic home, as well as open part of the exposition to the public. In the next stage of the project, the remaining convent premises will be restored and rebuilt in order to accommodate the main exposition of Latvian history in the castle. While the castle is under construction, the public has the opportunity to take a virtual 3D tour of the most important part of the restored castle by video.

SRE currently continues works on 54 different construction sites of national importance, with a total project budget of 223 million euros. The capital company provides professional real estate management and administration for approximately 400 real estate properties with 1100 buildings of 1.02 million square metres and more than 3600 land properties with an area of 9.6 million square metres. SRE is one of 23 Latvian companies that have received the highest platinum award as part of the Sustainability Index of the Institute of Corporate Responsibility and Sustainability, confirming the good governance and sustainability of its operations. The company was founded in 1996 and is 100% owned by the Ministry of Finance of the Republic of Latvia.