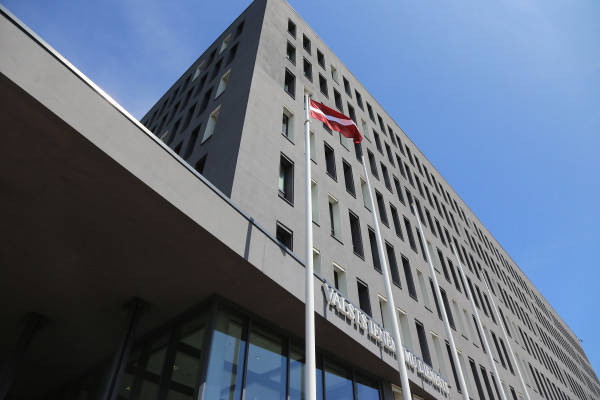 Since the end of 2019, the State Real Estate (SRE) office has been located at 1 Talejas Street, which was initially designed as an office building for public administration structures, primarily for the State Revenue Service (SRS). There is more space than is necessary for the SRS institution, part of it is applicable to the needs of other state institutions. When moving to Talejas Street, one of the main goals of SRE was to combine its structures at different addresses under one roof and save on necessary daily resources, as well as, of course, to bring an innovative and modern natural environment to the building with rationally chosen sustainability solutions.

Andris Vārna, member of the board of SRE, appreciates the flexibility of the building layout and the advantages of open planning, which is a successful platform for the needs of an activity-based office. The Talejas Street building is one of the most valuable in all of Latvia, as sustainability solutions are not outdated and have been working flawlessly for more than 8 years.

The sustainability of the building has also been acknowledged by the largest tenant of the building, the SRS, which moved to the building in 2014 with administrative staff from 14 different addresses. Deputy General Director Indra Kārkliņa points out that the SRS was one of the first in the public administration to implement such a venture. Undoubtedly, the move to such an open work environment was associated with a change in thinking and culture, as well as a necessity for further commutes for employees who used to work in the city centre. At the same time, the layout of the building allows adaptation to a changing work environment. The office environment is convenient and appropriate for both a project management-oriented approach and analytical work. The work environment is safe, notes Indra Kārkliņa, here there is a very good solution for customer service and the requirements for environmental accessibility have been met. Already at the time this building was designed, the architects' visions encoded the future needs of the office. The years of the Covid pandemic have shown that it is necessary to work in both remote and on-site models, so now we are moving towards narrowing the area of the premises. It is planned to introduce booking systems for the rooms, separating quiet and open areas, thinking about the intellectual and physical comfort of employees.

Nowadays an irrational waste of resources has long seemed like a bad idea. And one of the biggest consumers of resources is a building during it’s operation. Engineers and architects around the world design and create a variety of innovative solutions for the long-term economic use of buildings. The building on Talejas Street was commissioned in 2013, and the resources invested in the implementation of the sustainability policy have paid off. The building has become an exemplary object, and SRE employees invite other public administration bodies to get to know the life of a modern, activity-based office, where every part matters – the environment, human resources, productive work planning, organisation of office equipment and realistic reduction of daily energy consumption.

Andris Vārna, telling about the daily life of SRE, points out that nowadays, no office in Europe has as many workplaces as the number of employees. According to global trends, the office accommodates workplaces for only 75 percent of the total number of employees. The rationale for this math is simple: some employees are on a vacation, others are sick or are on a parental leave, many project managers spend their days on site, and some are on business trips. Why keep redundant work places when each square meter costs a lot? In recent years, SRE has increasingly supported teamwork. In the Talejas Street office, each team can find a larger or smaller room to perform tasks together. Andris Vārna emphasises important facts – compared to the previous work at different addresses, the area allocated to employees has been reduced by 45 percent, which will save about a million euros in 5 years. In turn, SRE has already reduced the energy consumption for the operation of the office premises by 65 percent since its relocation to this office.

SRE is the first public administration structure in the public sector that has introduced an activity-based office, and, points out Andris Vārna, has developed guidelines for all public sectors, inviting them to join the sustainable and productive work of the office. The guidelines are available on the SRE website. The work environment must be transformable, with the ability to adapt to different needs in order to focus on achieving goals. The work environment of SRE is indeed lively, flexible, and employees feel good about it, recommending SRE as a good employer outside the office. SRE is currently working with other tenants to help create a modern work environment that is universal, that is, adaptable to the performance of a variety of tasks.

The universal nature of the building

Looking at the long history of the building, the first layouts were made in 2004, while the design competition was announced in 2007, where the main accolades were received by the architect’s bureau Sarma & Norde, and the development of the project began in 2009 under the direction of architect Jānis Norde. Planning was not an easy process, only the overall picture was known, that the primary user of the building would be the SRS. As it is known, taxes are changing, thus the structure of the SRS and, accordingly, the needs for the premises are changing. Changes in the structure of the SRS took place faster than the ability to implement changes in the design process, so it is a logical decision for the architects to design a building that can be used universally with a flexible layout for different situations.

The large plot of land to which the developed Talejas Street adjoins is reserved for public administration institutions. For various reasons there is only one building there, perhaps a little remote. However, in the future, a full-fledged quarter with an integrated multi-storey car park is planned in this place. A tower-like building would not be a rational choice for the needs of the SRS, therefore a plan was developed for the construction of a full perimeter construction with 3 courtyards and 8 staircases and communications located in vertical shafts, for the convenience of which a door was built on each floor. Eight staircases provide a great opportunity to organise the life of the building according to the situation, even if all 8 blocks are dedicated to different functions. Convenient, thoughtful and future-oriented.

The ingrained values have paid off over the years

The desire of the SRS management as the anchor tenant at the beginning of the planning stage included an indication for the construction of a separate office for each employee. At the same time a task was received from the customer to build in a reasonable and rational manner. A productive economy permeated the construction project from the very beginning, starting with a rationally selected network of columns, thus saving 2,000 tonnes of concrete. In long discussions with architects and heads of SRS structures, consent was obtained for the establishment of an open-planning office. In addition, on each floor, of course, there are some individual work rooms, and rooms for meetings and negotiations. In addition, the individual sections of the building allow the SRS structure to breathe – if necessary, occupying the entire existing area, if not, any of the sections can be leased to a commercial company or other public administration structure. Over time, everyone has recognised that open planning has led to savings and productivity. Satisfaction levels are high at both employee and management levels.

In order for the operating costs to be reasonable, various innovative sustainability solutions were studied and calculated during the construction process of the building, emphasises architect Jānis Norde. Some of them were too expensive and were abandoned. Ones with an understandable recoupment period and not exceeding 7 years were integrated. The most efficient is the cold storage tank, in which the cold is produced during the night, when electricity is much cheaper. Cold is needed to cool the building, and what has been accumulated at night is enough for daily work. Each part of the façade has different types of selective glass, for example, the D side has glass with high heat resistance and UV retention. External blinds are installed on the D side, they both shade the room and protect the glass from overheating, so heat does not enter the room. The blinds are equipped with sensors and operate automatically according to the set mode. However, it is also possible to control them manually. The light control system has become widespread over the years, but it was an innovation when the building was built. The light follows the person and switches off automatically in empty rooms. All used interior materials are anti-allergic. All engineering systems are available in vertical shafts or located under the installed ceiling – so the elimination of any defect is quickly feasible.

The story of the façade is interesting. The customer accepted the shade of grey which is brought to life in a free rhythm with colourful accents in the windows. To prevent the plaster façade from heating up, a special Caparol brand system is used, which protects the deeper layers from overheating. None of the sustainability options were chosen carelessly – in-depth research was carried out and various options compared.

As in an open work environment, it was important to provide comfortable acoustics. According to the calculations of specialists, acoustic ceiling panels have been installed, sound-absorbing fabric has been chosen for furniture and small partitions – it is not possible to hear what is being said beyond two rows, thus daily work is not disturbed.

The concept of building management and the method of regulating the microclimate and engineering systems developed by SRE specialists allow saving energy resources and preserving 21st century comfort in the premises.

As Andris Vārna, a member of the board of SRE, emphasises, the office environment in the building at 1 Talejas Street is like a living organism, it changes and will continue to transform over time, adapting to the needs of users and focusing on the most important thing – achieving results.

* The article was written by SRE in cooperation with the publicist Agrita Lūse/society BDCC.
The story of the building is captured on video: https://youtu.be/XnePcnoefQ4.