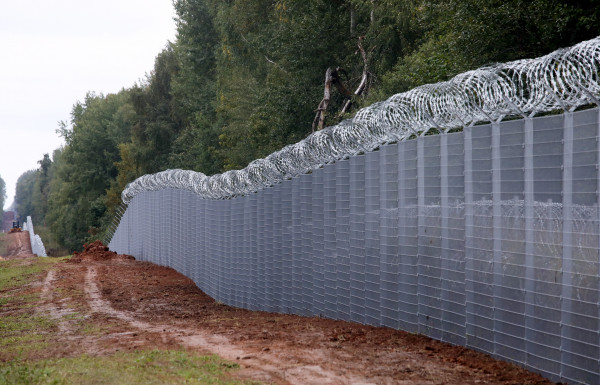 The first phase of construction works on the 83.9 km long Latvian–Belarusian external land border is actively taking place. Since August, 5 km of the permanent fence have been built, but in total, construction works are ongoing for 28.1 km of the deforested 57 km, informs Renārs Griškevičs, Chairman of the Board of SJSC "State Real Estate" (SRE).

Land levelling works are underway in a 12-meter wide border strip and the necessary infrastructure is being constructed to build a border strip with patrol roads and footbridges. Also, four bridges have already been built over several border area rivers. As the deforested area increases and the infrastructure works are completed, the construction of the fence will accelerate five times – up to one kilometre per day.

"The modernly equipped control strip with an almost four-meter-high fence on the Latvia–Belarus border is an important step in strengthening our internal security, as well as the external border of Latvia and the entire European Union. The temporary fence already proved to be a significant barrier to crossing the border, and the permanent fence will perform this function even better. Our services ensure order and security at the national border on a daily basis, but at the same time, in the conditions of a hybrid attack, we continue to work purposefully on the creation of infrastructure in order to continue to help the border guards prevent the efforts of illegal migrants to enter Latvia and Europe," says Kristaps Eklons, Minister of the Interior.

"Every day we see that even the temporary fence on the border with Belarus fulfils its functions, that is, it helps to prevent uncontrolled crossing of the external border of the European Union. The parameters of the permanent fence are designed with an optimal balance between security needs and construction costs. At the moment, there is no increased flow of people illegally crossing the state border. However, every week we prevent attempts of 60–80 people to enter Latvia illegally," emphasises General Juris Martukāns, Deputy Chief of the State Border Guard.

Currently, land preparation works are actively taking place – breaking of logs, milling, construction of culverts, trenches and embankments. Also, according to the schedule submitted by the National Collateral Agency and JSC "Latvian State Forests", 57 km of the more than 80 km to be deforested in the first phase have been deforested.

"We have given the highest priority to the Latvia–Belarus border construction project, because we understand both the complex geopolitical conditions and the importance of a safe border well. SRE is doing everything that depends on us so that it moves forward successfully and the works are completed in the shortest possible terms. As long as all the preparatory work has been completed, the speed of the construction of the fence is equivalent to that which takes place in other countries, for example in Lithuania," Renārs Griškevičs, Chairman of the Board of SRE is convinced.

"The border between Latvia and Belarus runs in a topographically difficult area. And one of our biggest challenges is the surveying and deforestation of the border strip, so I can only call on all involved parties to actively engage in the works, so as not to unnecessarily delay the further construction of the fence and border infrastructure," invites Ramona Innusa, Director of the National Collateral Agency.

In total, the project envisages the construction of a 173 km long Latvia–Belarus border strip. The first phase, 85.9 km long, will be completed by spring 2023, and the second phase, 63.9 km long, by spring 2024. Alongside the design and construction of the first two phases, the development of the technical specification for the third – Daugava – phase is underway.

The eastern border project is an inter-institutional co-operation project. In accordance with the Law on the Construction of the External Land Border Infrastructure adopted by the Saeima on 12 November 2021, SRE manages, implements and supervises all works necessary for the construction of the border infrastructure, implements the procurements necessary for construction, and concludes procurement contracts. Implementation of the project is supervised by the Monitoring Committee for the Construction of External Border Infrastructure, which consists of representatives from the Ministry of Defence, Ministry of Foreign Affairs, Ministry of Economics, Ministry of Transport, Ministry of Agriculture, Ministry of Environmental Protection and Regional Development, State Border Guard, National Collateral Agency, SJSC “Latvian State Radio and Television Centre”, SJSC “State Real Estate”, JSC “Latvian State Forests”, Latvian Geospatial Information Agency and the National Armed Forces.

Up-to-date information about construction works on the Latvia–Belarus border can be found on the website of SRE:

SRE currently continues working on 46 different national construction sites, with a total project budget of more than 230 million euro. The company provides professional real estate management and administration for approximately 365 real estate properties consisting of 1100 buildings with a total floor area of 0.95 million square metres, along with land beneath the buildings covering 602 hectares and more than 3536 land properties with an area of 903 hectares. SRE is one of 23 Latvian companies that has received the highest platinum award as part of the Sustainability Index of the Institute of Corporate Responsibility and Sustainability, confirming the good governance and sustainability of its operations. The company was founded in 1996 and is 100% owned by the Ministry of Finance of the Republic of Latvia.