‘Valsts nekustamie īpašumi’: ceremony for the hand-over of the renovated Museum of the Occupation keys to take place on 13 August 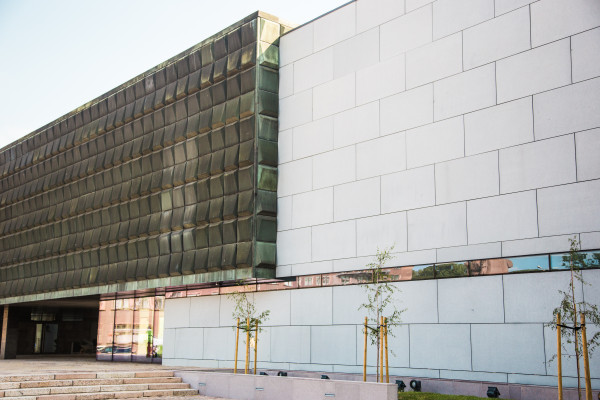 The building of the Museum of the Occupation of Latvia at Strēlnieku laukums 1 in Riga, renovated by VAS ‘Valsts nekustamie īpašumi’ (VNĪ) has been commissioned for operation. The reconstruction of the building has been carried out based on the design donated to the museum by Latvian architect Gunārs Birkerts, representing a story from the dark past to a bright future, expanding the historical building with a new, profusely-lit wing called the Building for the Future. On 13 August, VNĪ and other parties involved in this project will participate in the ceremony of handing over the keys to the renovated building to the museum for setting up its exhibits, as reported by Inta Plūmiņa, head of the VNĪ Corporate Communication and Sustainability Division.

Representatives of the press should apply for participation in the event and the tour of the renovated museum building, to take place on 13 August, at 11:00, via e-mail, komunikacija@vni.lv, or by calling 22076439 (Maija Trikule-Pleša). Attention! Given the national pandemic restrictions currently in place, the event may only be attended by those vaccinated against COVID-19, or who have recovered from it, or who prior to the event undergo a COVID-19 test with a negative result, presenting a COVID certificate and a personal identification document.

The renovated building will be complemented by a large outdoor object next to it: the 10 m tall and 18 m wide ‘Vēstures taktīla’ memorial to the victims of the Soviet occupation, which is a symbol for the connection between the present and the tragic events of 1941 when the Soviet regime deported more than 15 thousand Latvian citizens. The memorial is equipped with special audio-visual equipment creating sound, vibration and lighting effects integrating the memorial in the urban environment of Riga; once the building is handed over to the museum, the memorial will become available to the general public. Birches have been planted in the front yard of the building facing the Daugava, representing the birch grove as a typical natural scene in Latvia.

A total of up to EUR 10,434,869 will be invested in the reconstruction of the Museum of the Occupation of Latvia, the construction of the Soviet occupation victim memorial complex, and the renovation of Strēlnieku square: the Ministry of Culture has gained EUR 9,405,196 in funding from the national budget, the Museum of the Occupation of Latvia has provided EUR 160,000, and the co-financing provided by EU funds, the national budget and Riga City Council amounts to EUR 869,673. The construction was conducted by SIA ‘Skonto būve’ based on the design by architect firm SIA ‘5. iela’. The creators of the artistic idea for the memorial are Kristaps Ģelzis, Ilze Miķelsone and Voldemārs Johansons from SIA Taktila, whose sketch was found to be the best by an international panel of judges in 2007.

The renovation of Strēlnieku square are to still continue this year. Some of the square is owned by the state, and some of it, by the council. With the reconstruction of the museum’s complex, VNĪ took the initiative of renovating the paving of the area around the complex that belongs to Riga City Council, which is one of the first examples of the national and the municipal governments collaborating to achieve a common goal. VNĪ and Riga City Council have agreed to renovate a half of the square in late autumn this year, with plans for the council to repair the remaining part of the square, near Riga Technical University, in the coming years.

Under the conditions of the pandemic, in accordance with the precautionary and safety requirements, work at 43 national construction sites with a total project budget of 156 million euros continues under the management of VNĪ. The company is one of 23 Latvian companies that have received the highest platinum award as part of the Sustainability Index of the Institute of Corporate Responsibility and Sustainability, confirming the good governance and sustainability of its operations. VNĪ was founded in 1996, and is 100% owned by the Ministry of Finance of the Republic of Latvia.